How I Summited Stok Kangri in 51 Hours 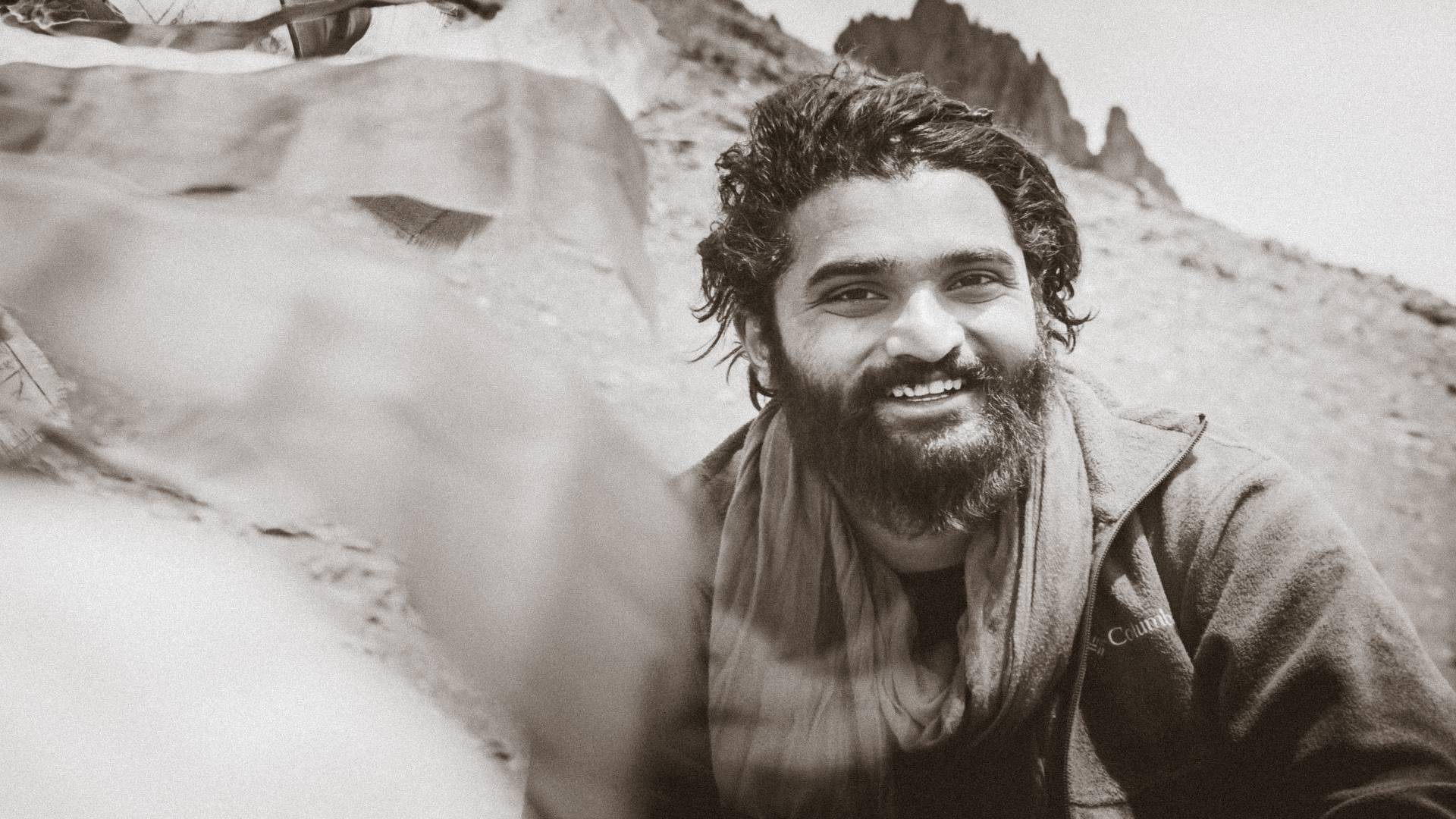 The fearsome wind is blowing in its full glory. And I, crouching in the snow halfway of the climb, half sleepy, half disoriented, am thinking what did I do that my life brought me here. My past few months flash-backed in front of my half closed eyes in few minutes.

” …and that day, I ran 19 kilometers without stopping. Just a month ago, I couldn’t walk properly, I still had a limp. The screws in my leg were rubbing against my skin. The rod was taking most of the weight and impact as the bones weren’t exactly healed, the fibula looked fine but the x-ray still showed gaps in the tibia. But, the fact that I had to climb that mountain in a couple of months, kept me going.

It was July already and I was headed straight to a friend’s home in Sanasar. I had a seat booked for an advanced mountaineering course in a few months and I had to be prepared. At the end of the course, we had two options; either to climb Mt Golap Kangri (6035m) or climb Stok Kangri (6153m).

A month before the course, I was already in Ladakh, exploring everything I can and a few weeks back did my first trek “Kashmir Great Lakes” which was a life-changing decision in its own nature. But this 20,187ft high mountain top stood in front of me as a barrier.

They say that in mountains, there are only two possibilities, either you can do it or you can’t. And I wasn’t the kind who settled for consolation. It wasn’t about summiting the peak anymore, I had to prove to myself that I was worthy of climbing the Himalayas again. I needed to gain my confidence back. And one fine day I just sat down and had a conversation with the mountains, and they told me, to just do it now, to not wait for anyone’s approval. They told me to do it, do it for life that I lost and for the hundreds of people who look up to you as their inspiration. They told me to not let anyone and most importantly myself, down.

So that day I borrowed a friend’s crampon, bought a new backpack and told myself, you are going to climb that mountain and there’s no stopping you.

It was August 12th of 2015. I was all set and a little late. I booked a cab to Stok Village from Choglamsar which cost me just Rs.150. I reached Stok Village at around 3 pm and I started my trek from there. It wasn’t that difficult finding the trail though there was hardly anyone because it was already evening.

At around 7 pm I reached Mankarmo. I didn’t know if I had a good pace because I was just competing with myself but I did not want to climb higher because I knew all about AMS from the course and my time in the Himalayas. It was getting cold and I cursed myself for not bringing my gloves along. I thought Leh had a warm weather in August so it won’t be a hassle, but I was wrong. it made me nostalgic for my first bike trip to Rohtang Pass and how I did not carry a sleeping bag assuming the tent would be warm enough to prevent me from the cold.

Over the years, I’ve learned a lot about the mountains, solely based on experience and not research. Most of my knowledge about the Himalayas, to date, is mostly acquired out of necessity instead of books or the internet. As they say, you are not a soldier until you are in the war zone. Now, specifically for that trek, my new lesson was, never to underestimate cold.

Next morning, I started late and after reaching the Stok base camp at 11 am, I soon found that the campsite was out of my budget. I went up to the advanced base camp in order to acclimatize and it was nice and sunny so I took a long nap, happy to have been living my dream. I returned in the evening knowing I had only one choice; attempt to summit that night. I curled up inside the small dhaba tent and waited. It was getting dangerously cold. I was only wearing my normal trek pants and a windcheater over my T-shirt. Again, never dare underestimate cold.

Finally, it was after midnight and I mentally prepared myself for the climb ahead. I donned my headlamp and started walking. Now, because I did a little acclimatization walk earlier, I knew the trail that leads to the glacier and just had to find the other two teams who were also climbing and started early that night. Soon after reaching the ridge of advanced base camp, I spotted tiny dots of headlamps at a distance and started walking towards them. At around 3 in the night, I had crossed the crevasse area and was already at the bottom of the mountain face. the climb looked quite steep and I had no idea how difficult the next few hours would be.

The climb was getting steeper, I was getting more and more tired with every tiny step and my breathing started becoming hoarse. I kept climbing for another half an hour and then, got hit by a blizzard. The storm was so thick that couldn’t see anything; my head torch wasn’t cutting through the snow and in a matter of minutes, I lost the tiny blips of lights of the team I was following; at that moment I knew it was going to be rough; really rough. I was lost and soon it became impossible for me to climb any further. So, I dug a little snow, pat it to make it even and fit my ass in it so I wouldn’t slip and end up getting hurdled in the snow. I started getting sleepy as I got no chance to rest and had been walking since the morning. but I knew sleeping here was no option, so I just closed my eyes in order to get some mental rest in that fatal position.

I waited for half an hour but the storm showed no sign of mellowing down, the cold was making it worse so I got up and started walking. Five minutes into walking, I threw up thrice; I knew the altitude was hitting me, but the only way was up. Insanity! I thought to myself; Pure insanity. My hands were getting numb because of constantly holding the ice axe which had a metallic handle and then I puked some more. At this point of the climb, continuing forward was converting into madness but I didn’t realize that then. After twenty more minutes of walking, it was again time to dig a resting pit for me and get some rest. I closed my eyes and all I could feel was the pain. Raw, blood-freezing pain.

After fifteen minutes of staying put in that place, I decided to get going. The wind was still rushing and blowing snow on my face. Though I started walking upwards, I still had my doubts. Should I be going back? Should I try this another day? I was processing too many thoughts and was half in the hallucination state. All I needed was a little warmth and some hope. Just when I was about to give up, I saw an orange light rise from the horizon. That day, I realized the importance of the sun. Just the thought of it rising and giving me the warmth that I needed gave me something to look forward to. It gave me the hope I wanted and a feeble smile crept across my face.

I kept looking at the orange tint for ten minutes and it finally filled me up with warmth. The wind started to slow down and fog cleared. The mountain phase was visible again and I saw hope. I heard somewhere that the only thing more powerful than fear, was hope and at that moment I was overflowing with it. I knew I was going to make it; I knew I would climb that goddamned mountain (with respect to the Himalayas). It was no longer a quest to just summit the peak, I was on a new quest, a quest to climb and conquer the mountain inside me and tame the beast.

Suddenly it was all very clear. I realized why was I climbing, why I was there. Tears, tears rolling down my face, tears of happiness, tears of joy; and right before they freeze, they told me that it was going to be alright, this was it, you made it, you just summit the mountain. here…..

I know you’ve arrived here to read about how I climbed Stok Kangri in 2 days and that was that. That was the moment when I climbed the mountain both literally and figuratively. I summited at 8:30 in the morning, took some videos (with me barely able to speak with my frozen lips), returned to base camp in two hours by sliding down and losing my crampons in the process. Slept for two hours at the ridge in the sun and then decided to head directly to Leh instead of sleeping the day off. On August the 14th, I was back in Leh at 6 pm. I checked into a hotel, took all my dirty clothes off, and went to sleep under the comforts of a blanket.

View from the Summit of Stok Kangri

The time I reached Summit

My fingers pained for the next two weeks. I did my advance mountaineering course in September and climbed Mt Golap Kangri, just for the heck of it.

I keep saying this thing about igniting the fire when I take people with me for trekking and when they feel they are about to give up, I tell them this:

Stok Kangri Trek is one of the most beautiful treks in the Ladakh region.